Miami Trace opened the night with a couple of big plays on the way to a 42-20 opening week win over Circleville.

“This is one of the first weeks we had everybody together. Our guys came out ready to play and we felt we could outman them and we just wanted to get out and play and execute,” Miami Trace coach Jerry Williams said. “Offenses typically start slow in the season but we wanted to get out and get after it today and I think we did and we had success early.”

It took only one play for the Panthers to strike as Joshua Gilmore got behind the Circleville defense and caught a pass from Dalton Mayer that turned into a 60-yard touchdown 18 seconds into the game.

“We saw that their safety was pretty aggressive coming down and we wanted to show a big play action from the get-go. We put our fastest guy out there and put it up and it worked,” Williams said.

Forcing the Tigers to punt after three plays, it was Jayden LeBeau who took the handoff on first down and raced 45 yards for a score and 14-0 Miami Trace lead less than three minutes into the game.

“Those were momentum killers right there,” first-year Circleville coach Luke Katris said. “Momentum in football and high school sports is interesting. You have to be able to understand you’re going to get hit in the face sometimes and come back from it. I was proud of our kids in that moment. We just need to work on adapting more to it so we understand that when we bleed, put the Band-Aid on and don’t let it continue bleeding.”

Behind two scores, the Tigers put together a seven-play drive. Cade Burton picked up 40 yards on the drive’s first play and Colin Michael went straight up the middle to get the last yard and put Circleville on the scoreboard, trailing 14-6.

The Panthers were the only ones to add points the rest of the first half with a 23-yard scoring pass from Mayer to Gilmore late in the first quarter and then a 41-yard run from LeBeau early in the second put MT up 28-6.

A misplayed kickoff led to a quick MT score and then a fumble on the next drive led to another quick score to give the Panthers a 42-6 lead with 8:19 left in the second quarter and that’s where the score stood at halftime.

Most of the second half was played with a running clock because the Panthers were ahead by 30 or more points, but the Tigers didn’t use that as an excuse to quit.

Circleville put together an 11-play drive that culminated with Lucky Donaldson going in from a yard out to make the score 42-12.

A Miami Trace fumble a few plays later gave the ball to the Tigers at the MT 20-yard line.

As the Tigers had only attempted two passes at that point in the game, freshman Scott Moats was able to slip past the Panthers’ defensive backs and a halfback pass from Donaldson connected as Moats raced 80 yards for the score. Donaldson ran in the two-point conversion for the game’s final points with 6:03 left in the fourth quarter.

“I’m really proud of our two-unit, I call them the junkyard dogs, those guys get after it,” Katris said. “There is something to build here, we’ve just got to build it. We’ve got to come out better in the first half and the first quarter. If we do that we can be a tough out, like I told them, and everything depends on that.” 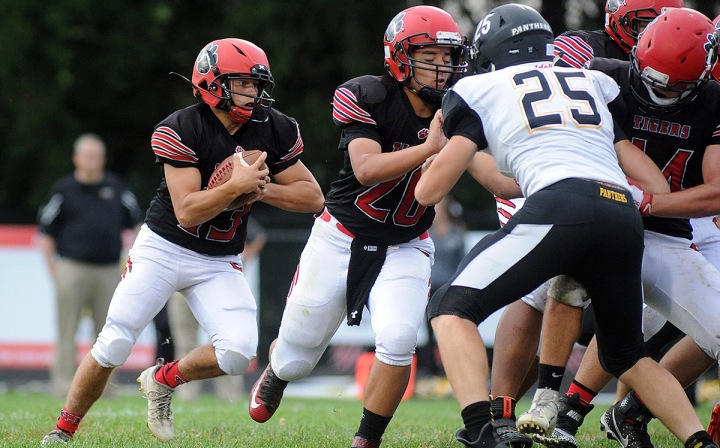 “I’m not happy with the second half whatsoever. I don’t think we came out mentally focused,” Williams said. “We’re still a very young team and we have yet to learn how to win and how to keep our foot on the accelerator. We have to get these young guys to learn the importance of there only being 10 weeks out there and that you’ve got to play play-by-play.”

Lebeau was the leading rusher with 129 yards while Cayden Griggs added 83 in the second half.

Gilmore had 96 yards on his three catches.

Burton was Circleville’s leading rusher with 76 yards on 10 carries.

Lebeau was the leading rusher for Miami Trace with 129 yards and Cayden Griggs added 83 in the second half.

Gilmore had 96 yards on his three catches.

The Tigers are home again next week as they welcome in Washington Court House, a 26-0 winner over Blanchester Friday.

“There are a lot of young kids and it’s the first Friday night and they felt it,” Katris said. “A lot of kids who played alright in scrimmages said, ‘Whoa, it’s a little bit different over here when we’ve got some people around.’ I think it will be better next week when we settle in. Usually game 2s are a little bit better for that. We’ll see what we can get out of them in practice and see how we can improve.

“That’s what I’m interested to see is what is our jump from Week 1 to Week 2.”