OBETZ — A two-time champion was knocked off in the boys’ Mid-State League Buckeye Division while it was “one for the thumb” in the girls’ track and field championships.

(Click here for photos from the MSL Buckeye championships.)

Host Hamilton Township and two-time defending champion Teays Valley were tied heading into the final event of the night in the boys’ meet. Fairfield Union won the race — the 1,600-meter relay — but Hamilton Township was second while the Vikings were two spots back in fourth. That was enough to give the Rangers a 117-114 final advantage over TV.

Bloom-Carroll was third in the relay and third overall with 107.5 points. Amanda-Clearcreek ended the night in fifth with 74 points, Logan Elm was sixth with 64 and Circleville was eighth with 42.

Fairfield Union’s girls claimed their fifth straight track and field championship picking up 48 points in the final four events to end with 137.66 points while Teays Valley picked up 28 points in that span to finish second with 121.5.

Logan Elm was fifth with 76.33 points, Circleville was sixth with 54.5 points and Amanda-Clearcreek was eighth with 36 points.

TV junior Dale Hubbard was one of the stars of the night as he claimed three MSL championships for the Vikings.

“I felt good today, got a lot of practice in, my block work was fine and I just did what I had to do and ran my race,” Hubbard said.

“I’ve put in the work all year and the outcome was I got first place,” he said.

Hubbard was the only local athlete to claim a title on the boys’ side Friday.

In the girls’ meet, TV’s Sheridan Tassy was seven seconds better than the competition in the 3,200 meters to win the MSL title and was second in the 1,600 meters.

Circleville’s Peyton Perini raced her way to first place in the 400 meters in a time of 59.68 seconds and was second in the 100 meters and 200 meters. She also joined with Katie Galloway, Quinn Dugan and Lily Winter to take second in the 1,600-meter relay.

Other strong showings from the boys’ meet included TV’s Eddy Tassy and Tucker Branson finishing second and third, respectively, in the 800 meters and Circleville’s Cole Pinkerton was second in the 1,600 meters.

Find full results of the meet by clicking here.

OBETZ — Two area teams find themselves atop the leaderboard after the first night of the Mid-State League Buckeye Division Track and Field Championships.

Teays Valley’s girls picked up 53.5 points to take the early lead with Logan Elm second at 45.3. Amanda-Clearcreek is sixth with 11 points and Circleville is in eighth with 8.5.

Amanda-Clearcreek tops the boys’ standings with 38 points while Teays Valley and host Hamilton Township are tied for second with 35 points. Logan Elm is in fourth with 32 and Circleville is in eighth with 16 points.

Alexis Jones led the way for the Vikings winning the discus with a throw of 115’ 2” and taking second in the shot put. 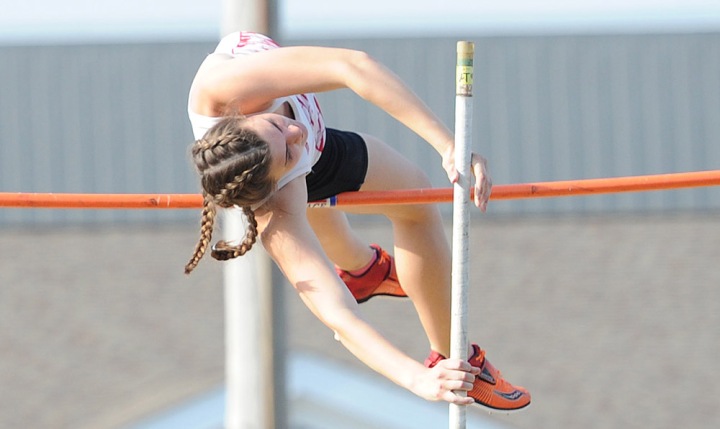 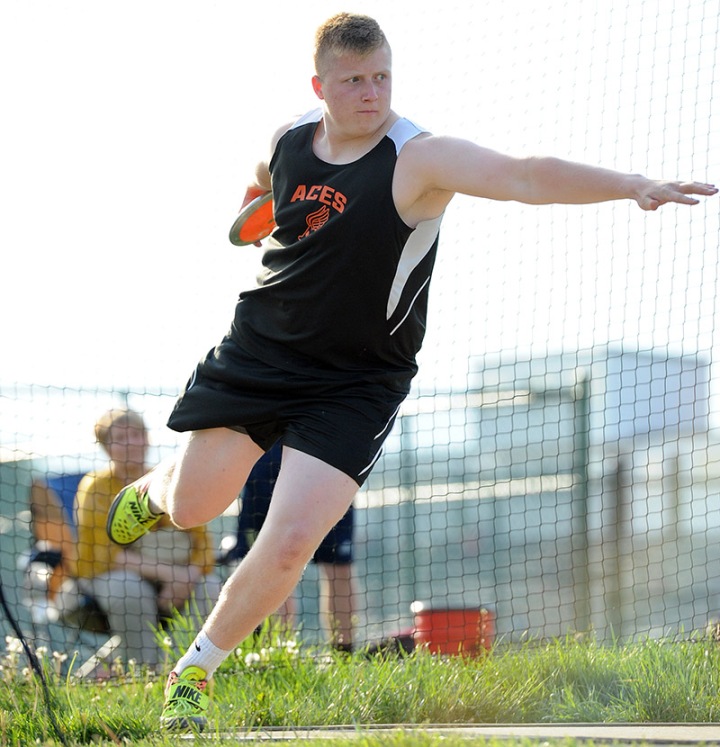 On the boys’ side of the meet, Amanda-Clearcreek’s Noah Smith claimed the MSL discus championship with a personal-best throw of 154’ 5” and was second in the shot put.

Logan Elm’s Hayden Karshner had a personal-best 52’ 2.5” to win the shot put while placing second in the discus.

Circleville’s Aiden Lowe had a season-best 5’ 10” to win the high jump. Teays Valley’s Colson Overmyer took third in the event.

The Teays Valley squad of Tucker Branson, Carson Weiss, Brice LeVeck and Eddie Tassy crossed the line first in the 3,200-meter relay with a time of 8:21.50.