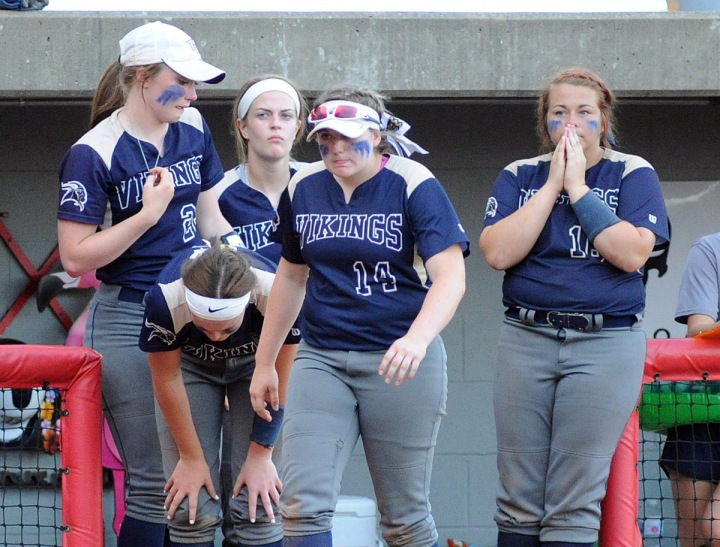 Teays Valley players show their disappointment after the final out of their Division I state semifinal loss to Perry.

Teays Valley’s hopes of a second state softball championship were dashed Thursday, in part, by the bat of catcher Gia Durieux.

The junior slugged three home runs (matching her season total) as part of a 14-hit effort for the Panthers (24-5) in a 12-3 Division I semifinal win over the Vikings.

Durieux hit solo shots in the second and seventh while hitting a two-run homer in the fifth.

The Vikings (23-4) showed a little power themselves as Macey Moore led off the bottom of the second with a solo shot.

The Vikings moved their beach party to home plate to celebrate Macey Moore’s home run in the second inning.

TV added another run in the inning when Sydney Salyards doubled to bring home pinch runner Megan Bush and tie the game at 2-2.

Perry came back with three runs in the third, tacked on four in the fifth, another run in the sixth and two more in the seventh.

TV added one more run in the bottom of the seventh after Sarah Klein led off with a triple. A fielder’s choice off the bat of Gracie Jo Thompson allowed Bush (running again for Klein) to score.